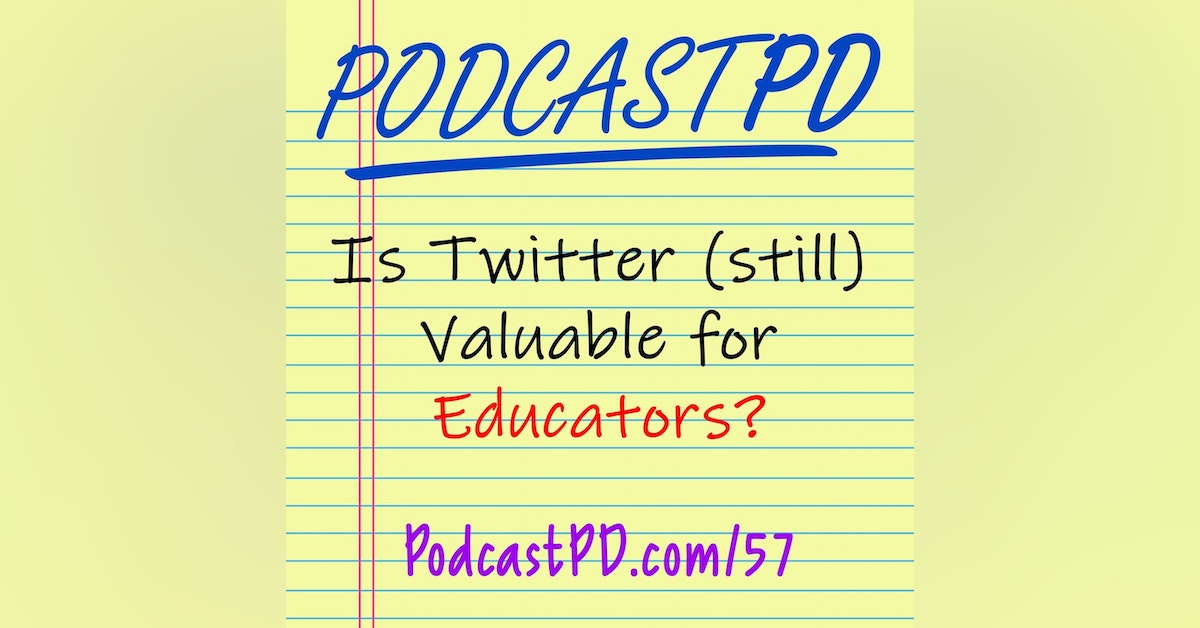 In 2008, Twitter came on the scene as a micro-blogging platform that asked its users, “What are you doing?” The social media platform quickly became a tool and resource used by educators around the world. In this episode, we discussed the relevance and value of Twitter to educators today.

There are points where we agree and disagree. We also know that there is still a lot to say on the topic and we would love to hear from you about the relevance of Twitter in education. Contact us here.

Thank you to Tracy Enos, Mike Brilla, and Stephanie Lewis who all contributed their thoughts for this episode.

What We’re Listening To

AJ: Feedback (and Other Dirty Words): Why We Fear It, How to Fix It by M. Tamra Chandler and Laura Grealish (audiobook)

Feedback: the mere mention of the word can make our blood pressure rise and our defenses go up. For many of us, it’s a dirty word that we associate with bias, politics, resentment, and self-doubt. However, if we take a step back and think about its true intent, we realize that feedback needn’t be a bad thing. After all, understanding how others experience us provides valuable opportunities to learn and grow.

The authors explain how feedback got such a bad rap and how to recognize and minimize the negative physical and emotional responses that can erode trust and shut down communication. They offer a new and more ambitious definition of feedback, explore the roles we each play as Seeker, Extender, and Receiver, and introduce the three Fs of making feedback focused, fair, and frequent.

When it’s done right, the feedback has been proven to be the most effective means of improving communication and performance for you and your organization. It’s too important to give up, and with Chandler and Grealish’s help, you’ll be able to use it deftly, equitably, and effectively.

Chris: Danica Patrick – Pretty Intense – I’m Danica Patrick and I’m Pretty Intense! I believe that each and every one of us has the power within ourselves to create the life that we really want. And I want to inspire you to go conquer your dreams, both professionally and personally. That’s why I created this podcast.

Stacey: Land of the Giants – In less than two decades, Amazon CEO Jeff Bezos scaled an online marketplace for books into the world’s most valuable company. But at what cost? From Prime and HQ2, to the growing adoption of smart speakers and home cameras, to increasing scrutiny of Amazon’s power and its role in the changing nature of work, Vox and Recode’s new podcast, Land of the Giants: The Rise of Amazon, addresses it all with detailed, thought-provoking, measured reporting from host Jason Del Rey. And it’s not just for insiders. This show is an essential guide to Amazon’s backstory for those unfamiliar and offers never-before-told, behind-the-scenes stories for the Amazon-obsessed.

Thank you to our current EPs:

This post may contain links to products or services with which we have an affiliate relationship. We may receive commissions or bonuses from your actions on such links.